WHEN the highly cerebral think-tank political research institution, Ibadan School of Government and Public Policy (ISGPP) invited eggheads, captains of industry, traditional rulers, as well as foreign experts to its inaugural conference, which was held at the International Conference of the University of Ibadan, a couple of weeks ago, little did they know that they would be opening a Pandora’s box.

The event exposed the slackness in governance in the country over time, and attempted to provide lasting solutions to the multitude of socio-economic and political problems plaguing the country.

The two-day inaugural conference of the Ibadan School of Government and Public Policy (ISGPP), which was an initiative of Dr. Tunji Olaopa, a retired Permanent Secretary in the Federal Ministry of Information and the Chairman Board of Directors of the school and  Professor Mabogunje.
In his chairmanship remarks, former President Obasanjo criticised some governors for managing their states poorly. He likened them to ‘emperors’ who are fond of mismanaging the resources of the states entrusted to them, even including funds belonging to the local governments in the states. “When governors take their money, chairmen of councils take the balance of the money put it on the table and share it out among the council members”.

He also expressed regrets that governance in the country had changed for the worse since his days as military head of state in 1979 and when he left as the country’s civilian president in 2007.
“It is delightful that this initiative is coming at this moment when the country is in search of new ways of doing things, given the crisis of governance that now manifests in vigorous ways. The drastic fall in the price of oil in the international market has unravelled the weakness of governance in Nigeria.“

“The Minister of Finance has recently announced that the 2016 Budget deficit may be increased from the current N2.2 trillion in the draft document before the National Assembly to N3 trillion due to decline in the price of crude oil. If the current fiscal challenge is not creatively addressed Nigeria may be on its way to another episode of debt overhang which may not be good for the country,” he said.

Obasanjo told the audience that he had identified corruption as the root cause of the distortion in the polity of the country some years back and that he has been vindicated by recent happenings in the land.

“Today, corruption drains billions of dollars from our economy that cannot afford to lose even a million dollars. It seems we are just beginning the fight against corruption afresh. Until recently, it seems corruption had returned with a vengeance, taking a seat at the very heart of government.”

He advised that the country should diversify in order to pull itself out of the financial quagmire; it has found itself in, warning about a worse scenario, if care is not taken on the prevailing mounting debts.

Anyaoku, in his keynote address, titled: “Nigeria: In urgent need of a truer federalism”, advocated a radical solution socio-economic and political state of the country. He advocated for a reversal to the regional government as a form of truer federalism.
According to him, Nigeria had made more progress in national development in the early years of its independence, when it practiced a truer federalism ‎with four regions as federating units.

In line with the political situation in the country, he advocated for the conversion of the six geo-political zones into a more viable federating units of a truly Federal Republic of Nigeria.
He, however, described the 1999 Constitution as not reflecting legitimacy nor provides an adequate basis for tackling effectively “our country’s two major challenges: socio-economic development and enduring political stability”.
He stressed that the states should be development areas within the regions, but with lesser responsibilities.
“The 36 states can be retained as development zones within the regions but without full administrative paraphernalia. And it would be up to the six federating regions to consider and meet any demands for the
creation of new development zones within them”.
‎
Prof. Evans, an American scholar who has studied Nigeria’s political structure for long, spoke on “State, Governance, and Democratic Development: The Nigerian Challenge.”

He identified eight areas of focus for Nigeria’s development. They were enumerated as State System and Political Orders, Optimization and Productive Innovation, Claiming Democracy, Social Wealth, the acronym of wealth being: Water, Electricity and Education, Agriculture, Lawful Governance, Transport, Health and Housing.

According to Evans, others include federalism and conglomerate governance, religion and public sphere, as well as collective security.

Professor Mabogunje who is the Chairman, Board of Directors of ISGPP, advised the federal government to be pro-active and apply informative approaches towards achieving efficiency and development.
He went down memory lane to give an analysis of some conflicts that have hampered the development of some countries in Africa.

“The decade between 2000 and 2010 was a relatively peaceful decade in
Africa. Several conflicts and civil wars that had wreaked havoc on the economies of various countries on the continent in the 1980s and 1990s, simmered.“

“However, commodity prices started declining after 2011 and tumbled in 2015. With that, economic growth in sub-Saharan Africa in 2015 slowed to an estimated 3.4 percent, its lowest rate in 15 years.“

‎”The fall ‎in the price of oil since late 2014 has had adverse consequences for the Nigerian economy that had remained dependent on oil revenue. Thus, it is not far-fetched to perceive Africa’s rise as simply a matter of favourable terms of trade.”

“In these contexts, governments must be proactive, anticipatory and accountable for meeting commitments even as national policies are increasingly influenced by factors outside domestic control.”

“It is the need to respond to these contextual factors in Nigeria that ‎informed the selection of the theme of this Conference: “Getting Government to Work for Development Agenda for Change”, Mabogunje said.

Dr. Olaopa who is the egghead behind the formation of the institute, revealed  that  the novel event, which he described as the school’s flagship agenda-setting programme  shall be an annual event.

‘’It is memorable for us at ISGPP in several ways. First, this occasion marks the birth of an idea and a new institution, a concretization of a long-held vision. It constitutes a moment of joy like the delivery of a baby after gestation and the pangs of labour.

“This baby is one catalyzed and absorbed by the virtue of reform, rising to the challenge in the statement by Moliere, the French playwright, that ‘Birth counts for nothing where virtue is absent.’’

Speaking on the School’s agenda, Olaopa said, The ISGPP is conceived to be more than just a school in a field littered with a plethora of schools. Its birth is tied to the virtue of reform, he said.

“The ISGPP constitutes the institutional framework around which ideas and
insights about reforming Nigeria can be distilled, calibrated and injected into the workings of governance and public policy in Nigeria.”

“Also, as a member of ISGPP team, I dare say that my apprenticeship in the civil service system for about three decades has afforded an insight into and deep understanding of the issues that afflict Nigeria. This apprenticeship has generated an enthusiasm and commitment to engage reforms and struggles to address Nigeria’s national development challenges.”Third, Nigeria is at crossroads right now. It is a threshold of change that may either bring about a difference in the living conditions of Nigerians or spiral into greater crisis. The current slogan of change must mean more than the mere change of government. The idea of change ought to constitute a serious challenge to our national lethargy, a call to rise up and get things done. Change challenges us all, and not just the leadership of Nigeria.”

He said the inauguration of the Ibadan School of Government and Public
Policy (ISGPP) constitutes a timely intervention in the ongoing efforts by concerned Nigerians and non-Nigerians to articulate ideas, policies and institutional frameworks to provide the needed paradigmatic redirection for our beloved country. 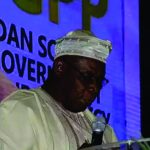 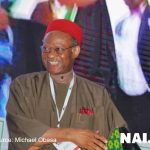