Reading is to the brain, what exercise is to the body. As part of ISGPP’s efforts to implement key initiatives for impact to be made in various areas of Nigeria’s societal life, an area identified which needs to be addressed is our reading culture. A popular saying goes: ‘If you want to hide something from a Nigerian, put it in a book’. This sarcasm speaks directly to a sad reality in Nigeria today. Especially amongst the younger generation, the value of reading seems to have been lost. The calibre of Nigeria’s older generation of academics has been diligently captured in a good number of publications, over past decades. It will be unfortunate for such quality to be wasted because we are not reading, especially as our libraries contain many classics ‘hiding in the open’ on shelves across the country.

A cursory glance at a cross-section of comments on social media networks on political issues and more, reveal the shallow-mindedness of most, due to poor knowledge of historical facts which has led to a disconnect from our rich intellectual past. With advancement in information technology, current affairs and news are very easily accessible. The challenge especially for the younger generation, is the need to ‘catch up with the past’.

A seemingly simple but extremely important brainchild of ISGPP’s Executive Vice-Chairman, the ISGPP Book Club will attempt to amongst other aims:

The second book reading event will take place at the premises of the Ibadan School of Government and Public Policy which is at No 24, Awolowo Road, Old Bodija, Ibadan. The book which will be read is Witness To Justice by Bishop Matthew Hassan Kukah.

Brief Review of the Book 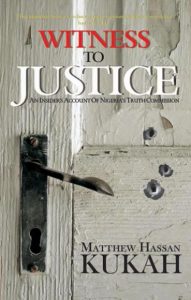 The author portrays the abuse of military decrees, task forces and tribunals to subvert the Judiciary and trample on the rights of Nigerians, groups and cohorts. They were used to promote impunity and mainstream which the author describes as the “child of necessity syndrome”. Besides setting up decrees, the military perpetrated evils such as arbitrary arrests, detentions, tortures, assassinations, annulment of elections and general dehumanisation of citizens, not to mention the marginalization of sections of the country from the mainstream of the commonwealth based on their roles in the sad and dark events of 1966 to 1970. On the other hand, those who played on the side of the North were integrated into the circle of privilege in the sharing of the oil wealth of the nation.

Meanwhile, the military, which took over power from the civilians on the pretext of restoring normalcy, was putrefying institutionally. Between the year 1984 and 1999, four military officers presided over the affairs of Nigeria. These were: Major General Muhammadu Buhari (1984-85); General Ibrahim Babangida (1985-1993), General Sani Abacha (late, 1993-1998) and General Abdul Salami Abubakar (1998-1999). The three surviving military leaders were summoned to testify and answer to the accusations levelled against them and their regimes. While some of their military and security operatives appeared, the threesome refused, hiding behind what Bishop Kukah describes as “dry legalism” which is the strict adherence, or the principle of strict adherence, to law or prescription, especially to the letter.

At the end, Bishop Kukah did ask the salient question: Did the Commission actually reconcile Nigerians? His answer is neither yes nor no. Instead he hangs it by saying “The end is actually the beginning” 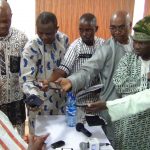 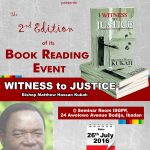