The Conflict Between Nigeria and Nigerians: A Review of Richard Bourne’s Book Richard Bourne, Nigeria: A New History of a Turbulent Century.

Nigeria: A New History of a Turbulent Century by Richard Bourne

Since its founding in 1914, Nigeria has not ceased to confound a plethora of observers, commentators, political pundits and students of history and politics. Nigeria became ‘One’ country in 1914. But what did this mean for the disparate ethnic groups populating the country? The ‘Nigerian’ identity welding the groups together has remained blurred and inchoate. Each group within the country has kept almost intact, its deep fears and insidious biases. It is the strength of Richard Bourne’s current book that it highlights and explains some of the causes and course of the problems and forces associated with the evolution, growth and development of the Nigerian state. In five richly supported sections, the author has taken us through the historical experiences of the country and its peoples.

Nigeria’s colonial experiences occupy a significant portion of Bourne’s attention, with nine of the eleven chapters in Sections 1 and 2 devoted to a detailed analysis of the effects of colonial rule on the state and society. Marshalling his considerable analytic and narrative skills, the author in ten other chapters spanning sections 2, 3 and 4 detailed the independence and post-independence experiences of Nigerians from 1960 to 2015. Section 5, which is the last section of the book is devoted to interesting reflections on the nature of
politics, ethnicity, religion, oil, poverty, inequity and the possibility of the country staying
together as one.

Since the country’s independence from Imperial Britain in 1960, the literature on
Nigeria, has with few exceptions made it a clear vocation to trace the tempestuous history of one of Britain’s most productive and problematic colonies from its pre-colonial and colonial past. This approach has since allowed for a more perceptive understanding of the country’s structure, orientations, multiple loyalties and conflicting emotions that have come to suffuse the entire country. Richard Bourne’s recent treatment of Nigerian history has followed this pattern. His book provides a comprehensive overview of the history of modern Nigeria leveraging on the country’s diversity and political power play.

Of course, the complexity of interfacing the different phases of Nigeria’s historical development within the present national context and the course of events over the years have yielded greater insights into the evolution of the Nigerian state and its people. For instance, he demonstrates the colonial legacy that persisted in the post-colonial period in a vibrantly profound way. It is the author’s clinical treatment of the significance of the period from 1914 to 1960 about indirect rule, taxation, rebellion, the interwar years, wartime needs, unionism, the shift in elite opinion, constitutionalism, the politics of nationalism, regionalism, and the promise and failure of the first critical years of independence that distinguish this book from previous works.

The dexterity with which he treated the years of military rule and the damaging effects of this on the country’s body-politic is clear and formidable. Richard Bourne’s book, whether intentionally or not, serves more to substantiate and appreciate the capacity of Nigerians to survive and bond together in the face of adversarial politics and bad blood. After all, he recognised this fact from several of his informants that Nigeria remains a “country that periodically looks over the precipice but that, except during the civil war, has never been in the most serious danger of falling.” (p.194). Can this still be replicated in the poisoned atmosphere of 2017? Only time will tell. 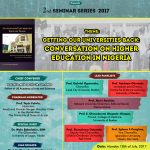 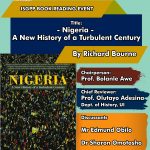