The book comprises 11 carefully selected chapters that are focused on a historical exploration of the challenges of Nigeria’s development. The editor adopts a methodology of selection of works embodying various ideas, constructs and theories about Nigeria’s development through case studies that traverse pre-colonial, colonial and post-colonial Nigerian society thus providing insightful information on the unresolved National question, the challenges of federalism as well as the nation’s democracy in contemporary times. What is very unique and notable also, is the editor’s inclusive approach as shown by the integration of other no less real and important aspects of our history such as Nigeria’s standing in the second world war, historical trade rivalries between the Yoruba ethnic group and Syrians in Colonial South-Western Nigeria, a glimpse of Nigeria’s health sector between 1956 and 1965, an interesting gender discourse set in colonial Ikaleland of South-western Nigeria as well as a spotlight on Ibadan in 20th century Nigerian politics. The ability of this book to bridge several interesting themes in a nuanced manner is demonstrative of the highly complex nature of Nigeria’s issues as well as the sophistication of the country’s nationhood.

Chapter 1 sets a tone for reader engagement by challenging the dominant forms of collective memories which, too often border on selective or concocted narratives rather than on due diligence and recourse to formal history. For the healthy sceptic, it also does a brilliant introspection on the concept of bias. Chapter 2 presents a brilliant chronicling of Nigeria in the twentieth century, exploring the tensions underpinning the post independence and post civil war eras as well as highlighting the absurdity of the Country’s underperformance and the enduring attitudes which accommodate it. Chapter 3 is revelatory, placing on record the actual number of Nigerian soldier combats in World War II and describing the controversial modes of recruitment which were employed by the British colonial authority. Chapter 4 is an interesting presentation of conflict theory built on what occurred between the Lebano-Syrians and the Yoruba people in Colonial Nigeria. The chapter is spellbinding perhaps given the metaphorical relevance it assumes for present day conflicts between stranger and host populations in the Country, such as today’s open-grazing Fulani herdsmen and the affected host farming populations. The remaining chapters are just as stimulating as they traverse various themes, bringing to focus the Country’s medical field, our oil dependent economy, the issue of women’s equality, as well as the political and economic eminence of Ibadan in the 20th century.

In conclusion the book is remarkable first, for its relevance as it boldly zeroes in on those issues which remain open sores in the life of the nation, such as for instance conflicts between stranger and host populations. Secondly the book successfully presents articles of scholarship in a manner which makes for highly interesting bedside reading. It is recommended for men and women of all ages as well as leaders and citizens from every tribe.

Edem Ossai is a member of the ISGPP Book Reader’s Club. She is the Founder/Executive Director, Mentoring Assistance for Youths and Entrepreneurs Initiative- MAYEIN 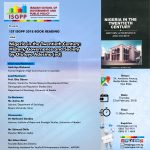