Recognising the importance of this issue in Nigeria, especially at a time like this when the federal government has identified the fight against corruption as one of her cardinal issues of focus; the Ibadan School of Government and Public Policy has adopted the topic Constitutional Foundations of Political Corruption in Nigeria, and a Reform Strategy for discussion at her June 2018 seminar/policy dialogue series. The conversation which will be led by Prof. Rotimi Suberu an erudite scholar and eminent professor of Political Science at the Bennington College, Vermont, USA will interrogate issues such as: corruptive effects of constitutional institutions; the nature of constitutional processes in Nigeria and its role in the corruption quagmire of the country; possible constitutional reform strategies for curtailing political corruption in Nigeria etc.

The event which is convened by ISGPP Chairman Prof Akin Mabogunje will be chaired by Prof Ayo Olukotun (Oba Sikiru Adetona Professorial Chair in Governance, Department of Political Science, Olabisi Onabanjo University, Ago Iwoye, Ogun state) while Dr David Enweremadu (Lecturer, Department of Political Science, University of Ibadan) and Dr Muyiwa Adigun (Lecturer, Faculty of Law, University of Ibadan) will be interrogating the topic as discussants. Also, other experts from the academia, government agencies and private sector who have been invited to the event will contribute further to the conversations.

Ibadan School of Government and Public Policy (ISGPP) is therefore happy to invite members of the public to be part of this all important policy dialogue/seminar series which will take place on Tuesday, June 12 2018 by 11am at the ISGPP Seminar Hall, No 24 Awolowo Road, Bodija, Ibadan. ISGPP is confident that cogent solutions to the endemic challenge of corruption in Nigeria will be identified and proposed at the seminar. 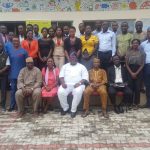